The Macon East Academy Varsity and JV Cheerleading squads attended the AISA East UCA Cheerleading Camp at Huntingdon College the week of July 6-9. The girls kicked off the week with the Home Pom competition on Monday as a packed gym of parents and students watched. The senior cheerleaders also participated in AISA All-Star tryouts Monday, and all of the Macon East seniors (Carly Boutreis, Hannah Davis, and Paxton Searle) were selected as AISA East All-Stars. These girls make up a squad of 24 seniors who will cheer at the AISA All-Star football and basketball games. Throughout the week the girls learned a number of cheers and chants as well as a hip hop dance and the Xtreme routine. Squads also received instruction from the UCA staff on stunts, jumps, and conditioning. Four Macon East cheerleaders participated in Tuesday night’s jump off competition. Annslie Gourlay and Caitlin Martin represented the JV, while Rai Pritchett and Paxton Searle participated in the Varsity division. Rai Pritchett was crowned the camp Jump-Off Champion among the varsity cheerleaders. Thirteen MEA cheerleaders competed in Wednesday’s All-American tryouts. A UCA All-American has the opportunity to participate in the Disney Thanksgiving Day Parade (JV) or the London New Year’s Day Parade (Varsity). Annslie Gourlay, Emily Claire Lott, Caitlin Martin, and Taylor Anne Surles received medals as JV All-Americans, and Rai Pritchett and Paxton Searle were selected as Varsity All-Americans. Paxton Searle and Taylor Anne Surles were both Pin it Forward recipients. This pin is given to cheerleaders who demonstrate leadership and character to their cheer teams and other camp participants. During Thursday’s final evaluation, both squads performed the Xtreme routine incorporating stunts and tumbling, as well as a cheer, chant and sideline dance in the Game Day competition. The Varsity squad received 1st place trophies for the Xtreme routine, the game day cheer, and overall game day. They were honored to be named Camp Champs in the small squad division. The JV squad received a 1st place trophy for the Xtreme routine and 2nd place for home pom. Overall the cheerleaders had a great week receiving numerous blue superior ribbons and a spirit stick each night from the UCA staff. Special thanks to the MEA cheer coaches, Kathy Loomis and Erica Hammonds, for their hard work and dedication throughout the summer practices and camp. 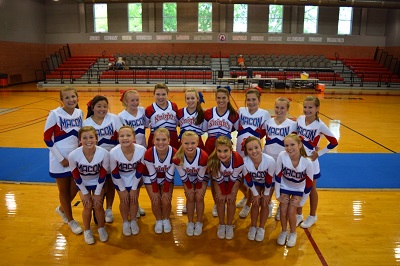 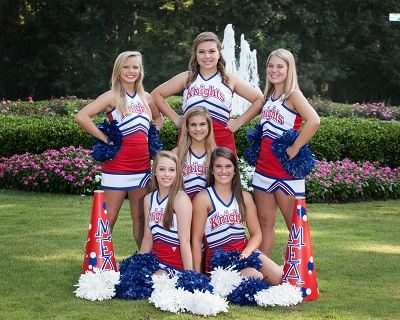 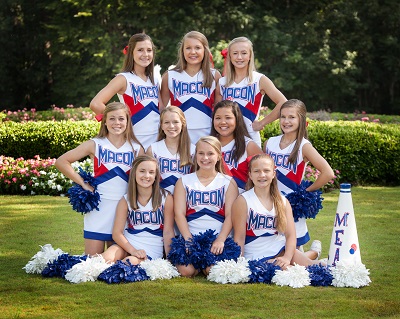