The 2015 varsity softball team at Macon East Academy celebrated their 4th state title in as many years receiving their state championship rings Friday, September 4 prior to the first home football game. The Lady Knights softball team ended the 2015 season with a record of 57-5. Former players Mari-Beth Baker (Mississippi State) and Cameron Redding (Troy) returned to campus for the presentation. Three former teammates who are now playing at the collegiate level were unable to attend. Outfielder and pitcher Deven Kennedy will be playing at Florida International University in Miami in the spring. Bailey Singleton, MVP in the state tournament, will be pitching for the University of Montevallo this season, and Jordan Amerson, MEA catcher, will continue her softball career at University of North Carolina – Charlotte. Under the leadership of Coach Glynn Lott, this year’s team will remain a strong contender in the AISA AA division as they strive for five in 2016. 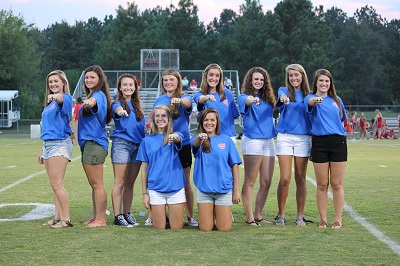