The Macon East varsity boys’ basketball season was nothing short of a fairy tale. Their 33-0 perfect season was flawless as was their teamwork and devotion to the goal of a state title.  After joining the Knights basketball program in 2015, Coach Larry Chapman has made every effort to build a championship team, and players from area schools and Birmingham transferred to play under his leadership.  Coaches Chapman and (Lincoln) Glass set out this year to become a more defensive-minded program that no offense could penetrate, and they succeeded beating the majority of their opponents by an average 38.9 point margin.  After playing in several tournaments this season and taking home the trophy from them all, only one trophy was still up for grabs.  Heading into the Elite 8 as Region Champions, the Knights eliminated South Choctaw with ease with Artavious Billups leading the charge with 30 points followed by Slate Garmany (14), Christian Lewis (13), and Kyle Edwards (12).  The Final Four matchup with Pickens Academy was a 63-29 victory led by Garmany with 28 points and Billups with 18.  As predicted, Macon East would face Autauga Academy for a third time in the championship game.  It all came down to this game, would the Knights continue on their streak or end this season like the last with a disappointing repeat runner-up trophy?  At the end of the first quarter with the Knights up 27-2 over the Generals, it became apparent that Macon East, now called one of the most successful teams in AISA history, would take home the coveted state title.  By halftime with the score at 37-8, the excitement was building among the Knight fans and the bench.  This team would be the school’s first since 1973’s Macon Academy team to win a state championship in basketball.  As time ticked off the clock the coaches cleared the bench, and the starting line-up cheered for their teammates to finish what they started on the court.  Once again Artavious Billups and Kyle Edwards led the scoring with 19 each and 13 points from Slate Garmany.  These three would be named as members of the all-tournament team with Billups selected as tournament MVP.  The three senior starters (Artavious Billups, Slate Garmany, and Christian Lewis) will go on to represent Macon East in the AISA All-Star game on February 17 at Huntingdon College.  Seven seniors top the roster for this year’s team, but only one was given the honor of grabbing the trophy.  Channy Blackwell, sidelined since football season with an ACL injury fought back to play basketball this season and live out his team’s dream of a state title.  Making appearances in just a few games, it became apparent that the injury was not fully recovered, so instead he became a fourth coach to his teammates and chief encourager.  Like Channy, we all had tears in our eyes as he took the trophy back to his team.  These boys are now like brothers, and each of them will tell you that this season, this team with one dream, is one they will never forget. 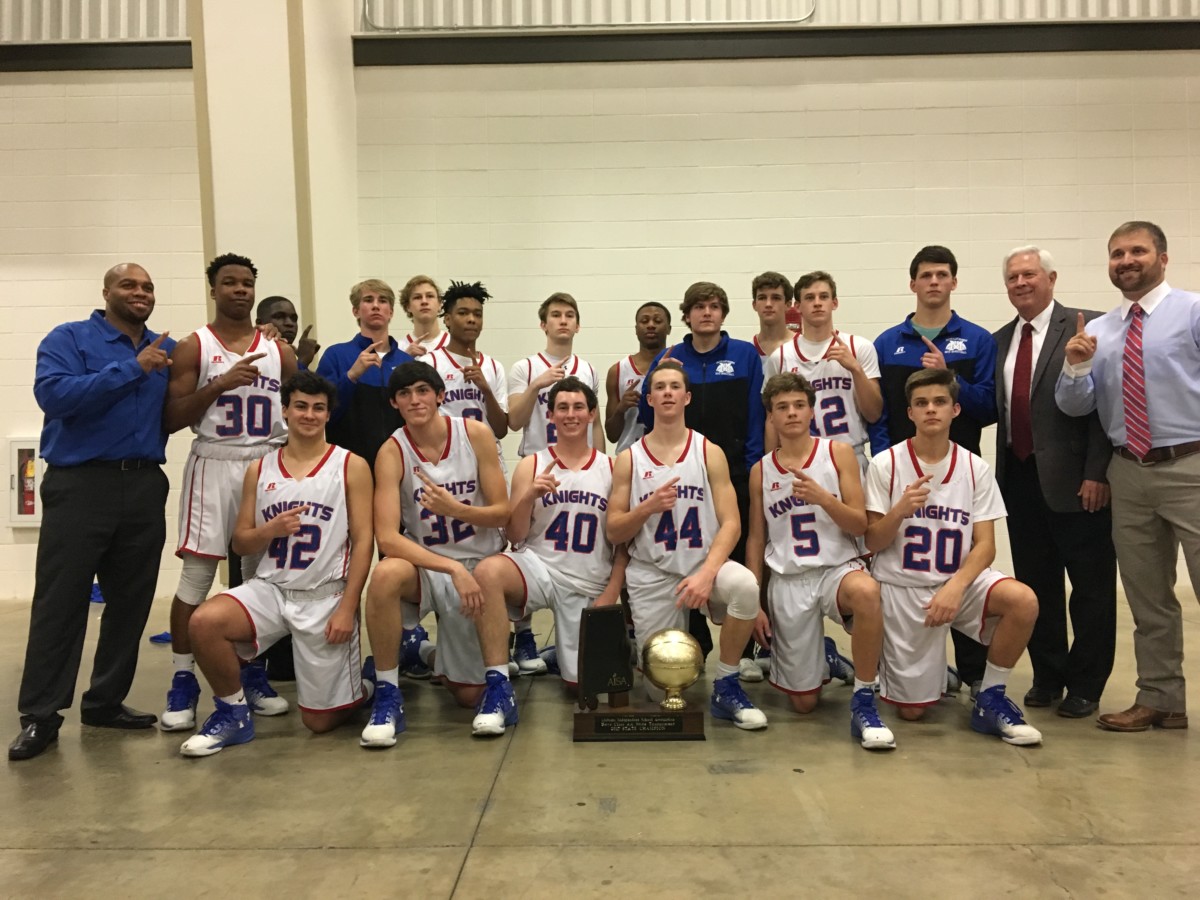 The varsity girls and boys basketball teams capped off an awesome season winning the Region tournament.  Both teams are headed into the State Tournament this week vying for the AISA AA title.  All-tournament accolades were given to Sommer Sears, Bailey Williams, Artavius Billups, and Logan Goree.  Madisyn Kennedy and Kyle Edwards were selected as tournament MVP.  This is the second year both teams have competed in the state tournament.  Make plans to come out and support the Knights at the Montgomery Multiplex. 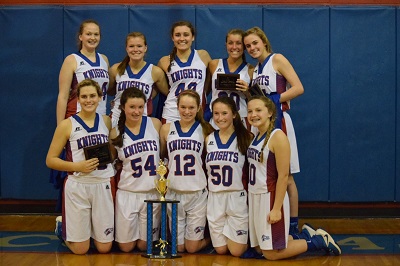 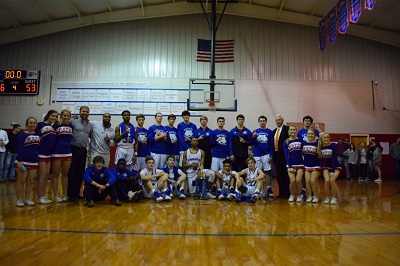 The JV boys team brought home Macon’s first JV State Tournament win in basketball history.  Mike Murry, dubbed the freshman phenom by Coach Glass, led the team all season.  Finishing the season with a 14-7 record, the JV team continued to improve through adversity.  Averaging 24 points per game, Mike Murry,  earned himself MVP honors at the State Tournament.  Stone Yarnell and Lane Goree’s efforts on defense earned them both spots on the all-tournament team, while Jake Wyrosdick and Tanner Moore added points to the board.  From the energy of the bench to the passion of the fans, the team made this season and tournament a memorable experience. 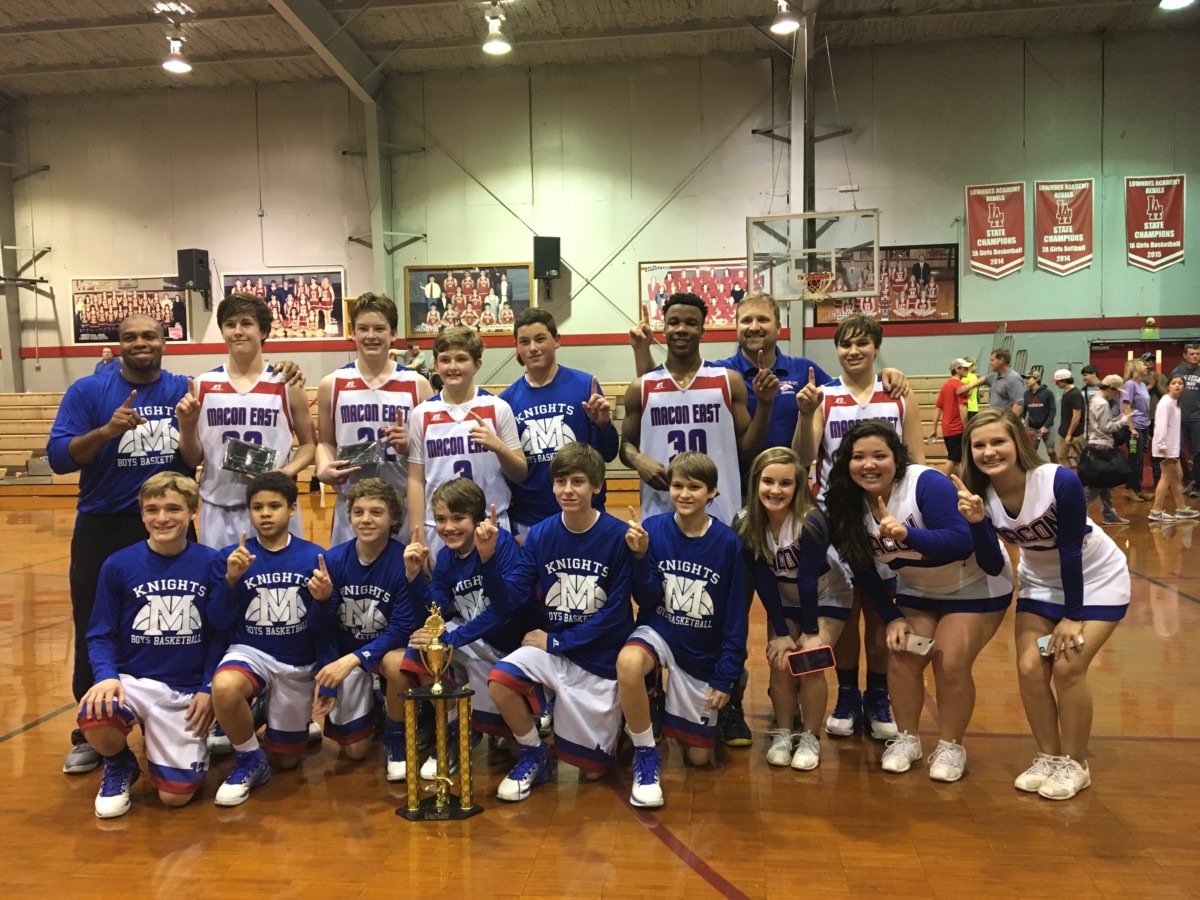 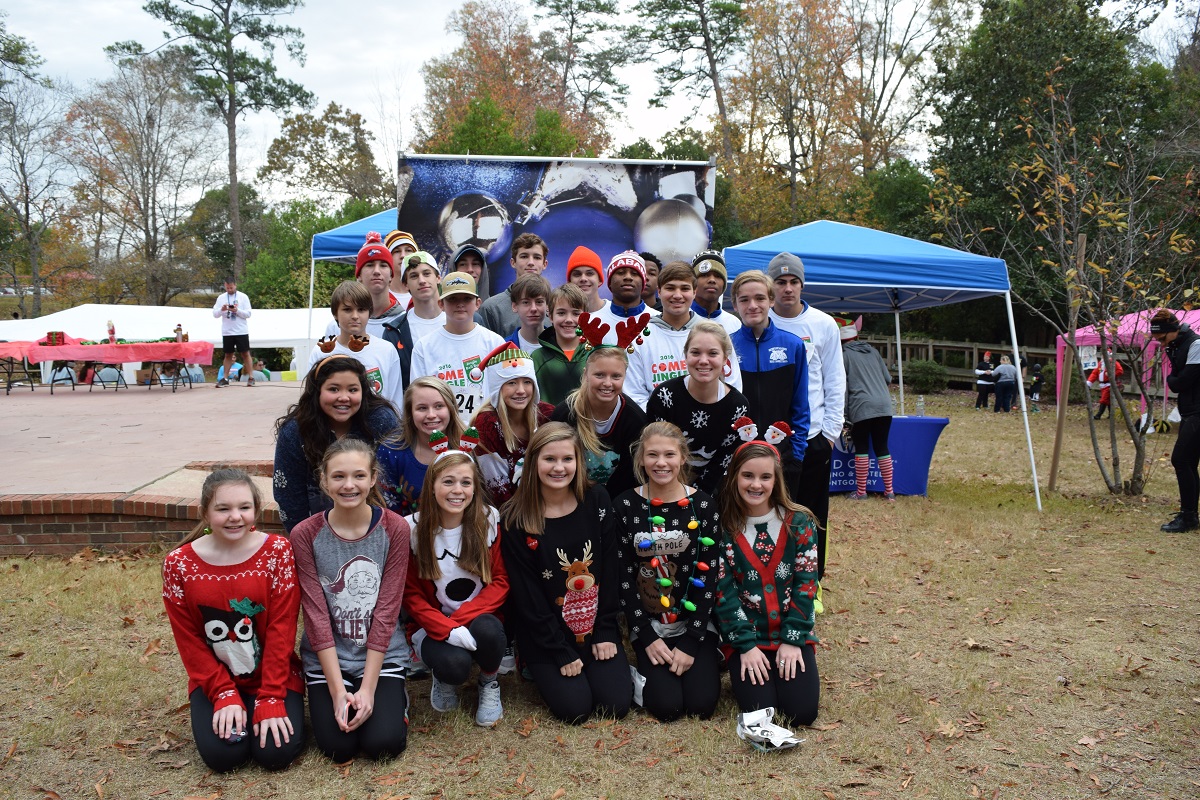 The 2015-2016 varsity basketball teams continue to receive local and state accolades following an outstanding season on the court. Jesi Garrett (pictured) was selected as the AISA All-Metro Player of the Year and was named to the 3rd team for All-State. Jesi averaged 21 points per game for the Lady Knights along with 14.6 rebounds and 5.4 assists. She led the team to the state semifinals along with teammates Lexi Brantley (2nd team all-metro) and Paxton Searle (honorable mention all-metro), and all three participated in the post season all-star game. Mason Blackwell joined the Knights for his senior season and was selected as 1st team AISA All-Metro and 3rd team All-State. Averaging 13.5 points per game, 8 rebounds, 2.7 steals along with 6 double-doubles for the season, Mason also represented MEA in the all-star game. All-Metro recognition was also earned by juniors Channy Blackwell (2nd team) and Slate Garmany (honorable mention).

Along with these athletes, Macon East’s outstanding coaches did not go unnoticed for turning around the basketball program and taking both teams to the state playoffs. Coach Glynn Lott returned to basketball this year as the head coach for the girls program and took them to the state semi-finals. He was named AISA All-Metro Coach of the Year with a record of 20-6. Retired AUM men’s coach, Larry Chapman proved he still had what it takes, leading the boys team all the way to the final game of the state tournament. His team finished with a 17-6 record as the state runner-up earning him Coach of the Year honors for All-Metro and All-State among AISA schools. Congratulations coaches and players!

The Macon East varsity boys basketball team ended their season as the 2A State Runner-Up after a tough loss to Edgewood in the final game of play at the Montgomery Multiplex. The 2015-2016 season was an exciting one for the Knights with both the varsity girls and boys teams advancing to the state playoffs. In Elite Eight play Coach Lott’s girls defeated Russell Christian 56-44 led by Madisyn Kennedy with 16 points and 11 rebounds and Jesi Garrett with 14 points, 17 rebounds, and 4 steals. Coach Chapman and the boys team easily handled Marengo winning 60-30 with 24 points from Channy Blackwell and 9 from Slate Garmany. Advancing to the Final Four the Lady Knights fell to South Choctaw 40-50 as Garrett put up 11 points, 13 rebounds, and 4 steals followed by Paxton Searle with 10 points. The Final Four match-up between the Knights and the boys of Restoration was an exciting one ending in a 68-57 win. The Blackwell brothers led the scoring with 27 for Channy and 16 for Mason followed by 12 points for Slate Garmany.

On February 8, the varsity boys headed into the championship game with rival Edgewood. Down by two at halftime, the Knights had a hard fought (39-59) loss to the Wildcats. Mason Blackwell led the final game of his career with 18 points assisted by Logan Goree and Channy Blackwell with 7 each. Macon East’s Lexi Brantley was named to the girls all-tournament team, and Mason and Channy Blackwell received all-tournament honors for the boys.

The AISA East vs. West senior all-star basketball game was held February 19 at Huntingdon College. Representing Macon East on the East girls team were Lexi Brantley, Jesi Garrett, and Paxton Searle, and Mason Blackwell was selected to the East boys team. Each of these outstanding athletes enjoyed a few days of practice with their opponents from other AISA schools and the opportunity to get to know the other athletes as members of the same team. It was a fun night of great basketball, and the East was victorious in the girls and boys games. Carly Boutreis, Hannah Davis, and Paxton Searle also represented MEA as members of the East cheerleading squad. Congratulations to all of our senior all-stars! 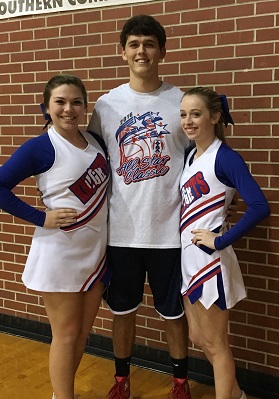 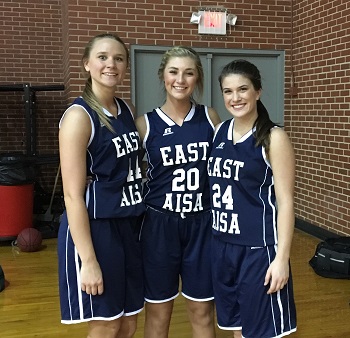 The Knights have had a fun and exciting season on the court this year. The JV Girls coached by Glynn Lott and Codi Moon finished the season with a record of 14-3 and were runners-up at the JV State Invitational Tournament. This year the JV Boys welcomed Coach Lincoln Glass to the program and ended a tough season at 3-11. The Varsity Girls finished the regular season first place in their Area. Also coached by Lott and Moon, the girls overall season record is 15-4 including a tournament win at the Pepsi Classic. Seniors Grace Allen, Lexi Brantley, Jesi Garrett, and Paxton Searle have led the team on and off the court. Former AUM Coach, Larry Chapman also joined the Knights basketball staff this year, and has had quite an impact on the program. The Varsity Boys also finished first place in the Area with a record of 14-5 and a tournament win at Autauga Academy’s Christmas Tournament. Although many members of this year’s team are new to Macon, they have truly embraced the Knight spirit and led the program with great enthusiasm. Seniors Mason Blackwell and Austin Reese are both first year athletes at Macon and have easily stepped into the leadership role with great sportsmanship.

The Knights headed to the AISA Region tournament January 29th at Edgewood Academy with a bye through the first round of play. Both teams advanced to the championship game following a 62-43 win over East Memorial Christian by the boys and a 58-21 victory for the girls over host team Edgewood. In Saturday’s games the Knights came up short with both teams taking 2nd place for the AA Region 1. Seniors Lexi Brantley and Jesi Garrett were named to the girls all-tournament team, and juniors Channy Blackwell and Slate Garmany received all-tournament acknowledgement for the boys. The Knights advance to the Elite Eight tournament Wednesday, February 3 at the Montgomery Multiplex. Games times are 6:00 and 7:30.

Macon East’s varsity girls team won the recent Pepsi Classic basketball tournament. Winning a close 52-50 game over Pike, the girls went on to face Edgewood in the championship game. Jesi Garrett was named MVP of the tournament, along with Lexi Brantley and Madisyn Kennedy receiving all-tournament recognition. The varsity boys lost to Pike in overtime of the first game 63-61, but went on to defeat Hooper in the consolation game. Junior, Channy Blackwell was named to the boys all-tournament team. Thanks to all the parents and coaches who helped host a successful tournament at MEA. 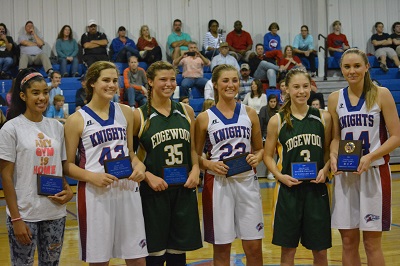 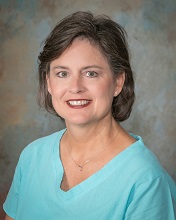 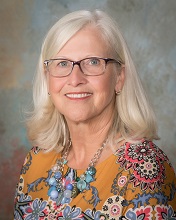 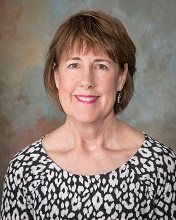 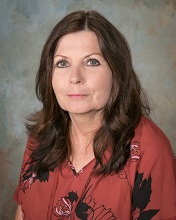 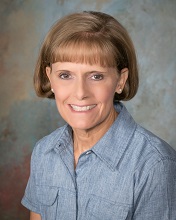