Macon East senior, Payton Traff received a full scholarship to play volleyball next year at McHenry County College in Crystal Lake, Illinois. Payton came to Macon East as a junior, and was an incredible asset to the Lady Knights team. In her two seasons at MEA, Payton amassed 606 assists, 221 kills, 106 aces, 62 digs, and 7 blocks. Coach Amanda Baubles said, “Payton always adapted well to whatever position she was asked to play and did an especially awesome job as a setter.” Payton was named to the All-Tournament team in the Region and State Tournaments in 2015. She was also named to Montgomery’s All-Metro AISA team.

Lexi Brantley made it official signing her letter of intent to play volleyball next season at Belhaven University. Blazers coach, Justin Dee is excited about the level of talent Lexi will contribute to next year’s team. A six year varsity player for the Lady Knights, Lexi and the Macon East team have won 5 straight AISA state championship titles. Lexi reached two major milestones this season racking up over 2,000 career assits and over 500 career aces. Lexi is more than a team leader on the volleyball court, she is an outstanding student, president of the SGA, MEA’s 2015 Homecoming queen, and an all around positive roll model at Macon East. Lexi is a leader at Macon East on and off the court, and we wish her all the best at Belhaven. 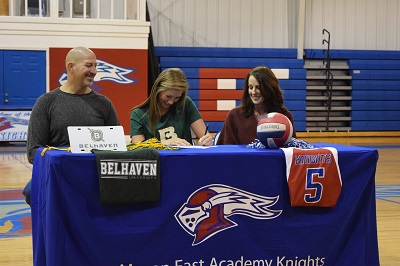 Jesi Garrett signed her letter of intent today to play volleyball and softball at the College of Coastal Georgia. Jesi is a 6 year varsity player for the Lady Knights softball and volleyball programs, and she is the only Lady Knight athlete who has earned 9 state championship rings (5 for volleyball & 4 for softball). In the 2015 state volleyball tournament, Jesi was named tournament MVP and set a career milestone of over 1,000 kills. As short stop for the softball team, she hopes to end her high school career with one more ring in the upcoming season. Along with her athletic achievements, Jesi is an outstanding academic student and all around leader. Way to go Jesi!!! 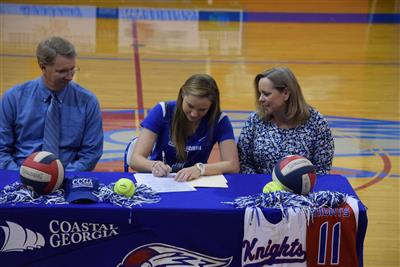 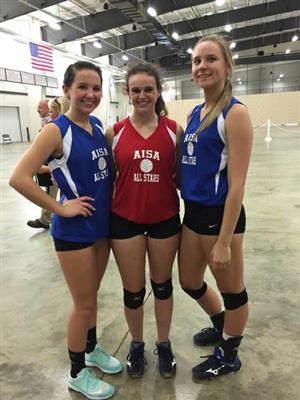 Jesi Garrett has been named as a state finalist for the prestigious Wendy’s High School Heisman program. Jesi is an exceptional student athlete and exemplifies the ideals of a Heisman. She was selected based on her success in volleyball, basketball and softball as well as her outstanding academic achievements in the classroom. Each state finalist receives a bronze medal and a Wendy’s gift card. The Wendy’s High School Heisman program has recognized exceptional student athletes for more than two decades. The program continues to provide a platform where students are acknowledged and rewarded for their hard work and also inspired to continue their success. Finalists are eligible to be selected as State winners and National winners. 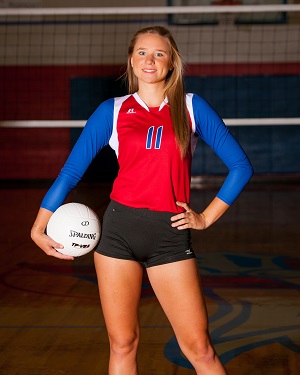 The varsity volleyball team did it again this season winning their 5th consecutive AISA AA State Championship defeating Kingwood Christian in the final game (25-19, 25-21, 25-20) at Faulkner University. The Lady Knights were undefeated all season with a record of 29-0 and 76 straight match victories. In the semi-final game against Coosa Valley, Macon East came back from a two set loss to advance to the final match. The loss to Coosa Valley ended a 199 consecutive game winning streak by the Lady Knights, but they did what they had to do to battle back and get the match win. Lexi Brantley and Payton Traff were named to the all-tournament team, and Jesi Garrett with 33 kills and 28 digs was named tournament MVP. Jesi also reached a 1,000 kill career milestone in the first game of the state tournament. Brantley who had achieved 500 career aces and 2,000 career kills earlier in the season finished the tournament with 7 aces, 31 kills, 5 digs, and 29 assists, along with Traff’s 50 assists, 12 kills, 5 aces, and 4 digs and Sami Nesbitt’s 15 kills, 10 aces, 14 digs, and 5 blocks. Both Brantley and Garrett will continue their volleyball careers next year at the collegiate level playing for Bellhaven University and College of Coastal Georgia. The Lady Knights will lose 5 seniors who lead this team on and off the court, but they will come back strong and ready for the challenge in 2016. 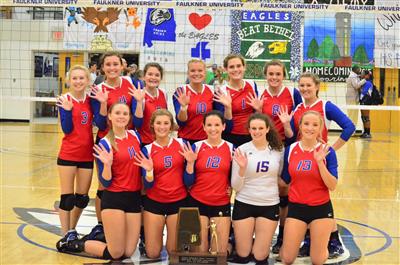 Senior volleyball standout, Lexi Brantley, has played varsity volleyball at Macon East since 7th grade and has helped lead the team to four state championships since 2011. This year the Lady Knights continue on a winning streak with an undefeated season headed into the playoffs. In 2015, Lexi has achieved two major milestones racking up 2,000 career assists and 500 aces. She was honored by her coaches, teammates, and the student body for these accomplishments at a recent pep rally. Lexi was also nominated as the Alabama high school volleyball player of the week. Lexi is more than a leader on the volleyball court, she is an outstanding student, president of the Student Government Association, representative in the Homecoming court, and all around positive role model at MEA. Lexi will continue her volleyball career at the collegiate level at Belhaven University in Jackson, Mississippi. The Lady Knights will continue to strive for five in the coming weeks leading up to the October 22nd AISA state championship. 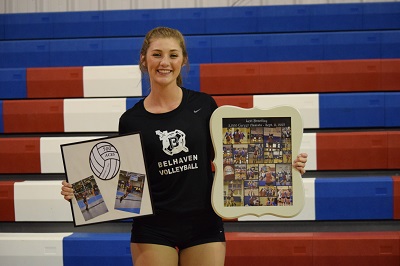 The junior varsity volleyball team competed in the AISA JV Volleyball State tournament Saturday, October 10 at Kingwood Christian School. The team played hard all day and advanced through the winners bracket to the championship game where they fell to the host team. Freshmen Madisyn Kennedy and Bailey Williams and 8th grader, Emily Brooks were named to the all-tournament team. The young team has had an amazing undefeated regular season, and the players have grown tremendously in their knowledge of the game. Coaches Amanda Smallwood and Brynn Nix are so proud of the accomplishments of this team of 20, which includes nine seventh graders. 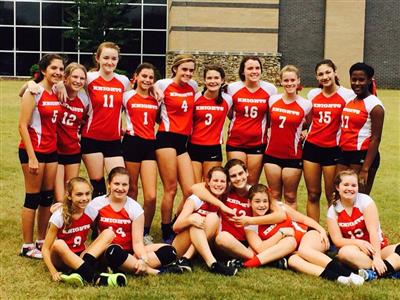 Four time defending state champions, the Macon East volleyball team hosted the 4th annual AISA Elite 8 preseason tournament. The Saturday tournament was a day full of great volleyball giving the players and coaches’ insight into the 2015 season. The AISA competition will be strong this season as the Lady Knights strive for a 5th state title in as many years. The eight teams participated in pool play early in the day followed by tournament games. Four teams (Bessemer Academy, Cornerstone Christian School, Kingwood Christian Academy, and Macon East Academy) entered the semifinal round. In the final game of the tournament, Macon East defeated Bessemer 2-0. The day was also full of fun as each team represented different female Superheroes enjoying minute to win it style games, a photo booth, raffle drawings, and lots of crowd involvement. The Lady Knights remain undefeated in the regular season. 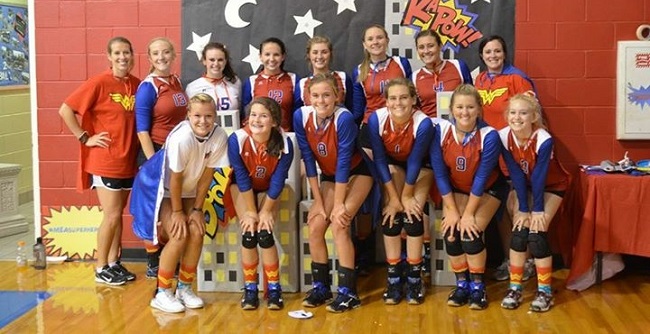